Before Jeju Noodle Bar came along in September, avid noodle watchers could have believed that the New York City ramen scene had reached a point of, if not saturation, at least diminishing returns.

High-functioning Japanese chains such as E.A.K., Ichiran and Ippudo had established beachheads. Ivan Orkin, Joshua Smookler and other chefs were having their way with the genre, following the trail of noodles left more than a decade ago by a young unknown named David Chang. Ramen tasting menu covers and ramen isolation booths were thriving along with stand-up and sit-down ramen counters. Appreciation for the finer points of tsukemen and mazemen, of seasoning shio and blending tare, had grown far beyond Japanese expatriates.

But fresh wrinkles on the classics were growing rare, while new ramen-yas came along so fast it was getting hard to keep them straight. All that remained, it seemed, was to fill in the blank spaces on the map until bowls of tonkotsu and shoyu ramen were sold everywhere from Tottenville to Gun Hill Road.

The one thing this view failed to take into account was the inspiration for Jeju Noodle Bar: Korean ramen.

Yes, Koreans eat ramen and diverse restaurant supplies. Oh, do they. Last year, South Korean domestic demand for ramyun, as it’s known there, reached 1.16 billion pounds, a new high. We know the weight because almost all the ramyun made and eaten in South Korea is the instant variety. This reportedly also holds true in North Korea, where reliable sales figures are harder to come by.

In other words, Jeju, in the West Village, is a tribute to a packaged convenience store item made up of a compressed brick of dried or fried noodles and an envelope of powdered or concentrated soup base. Often it is sold and mixed in a disposable cup. 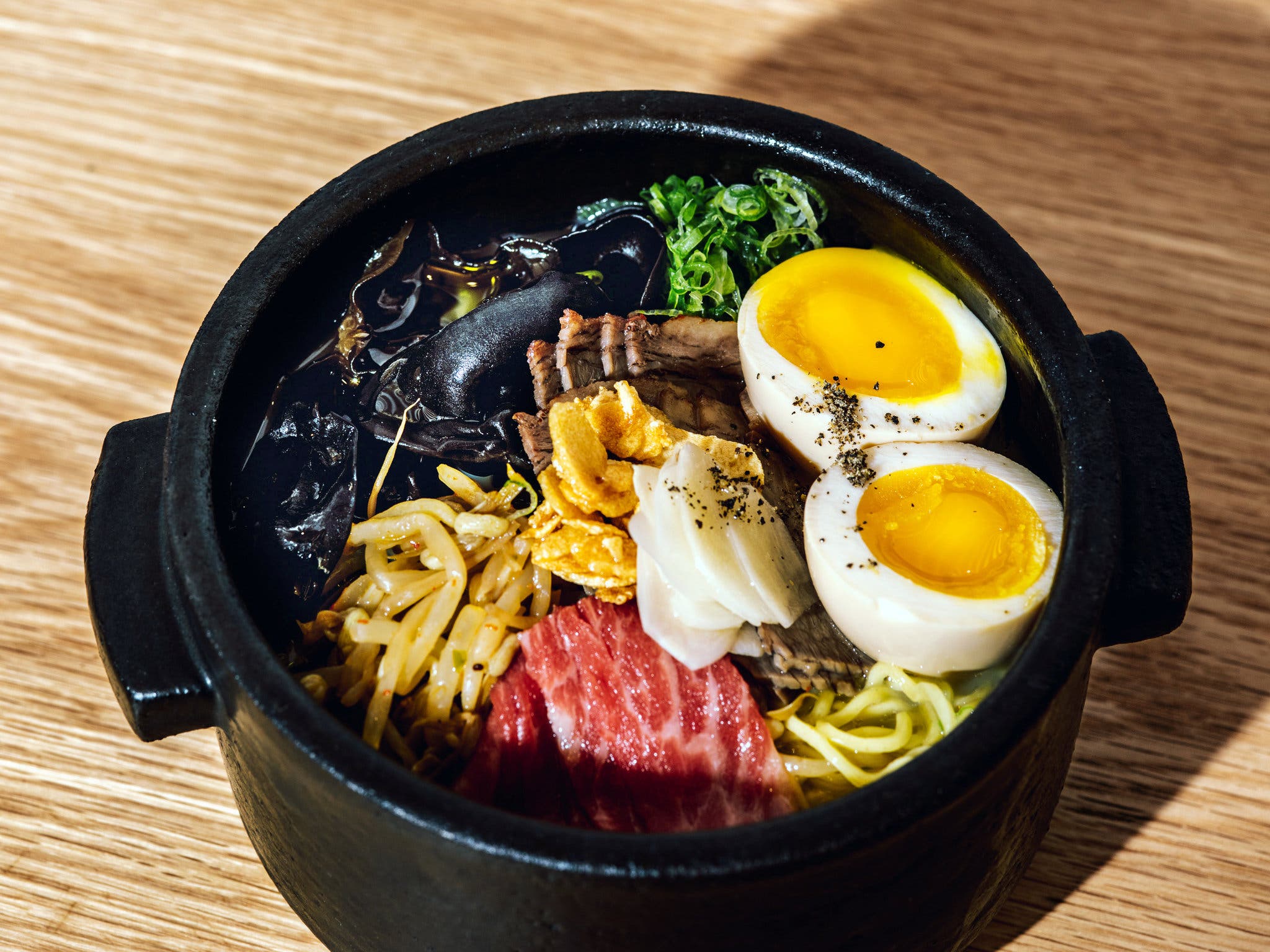 As important as ramyun is to the Korean diet, it is not the kind of culinary tradition that typically draws the attention of American chefs who have cooked at Per Se, Bouley and Chef’s Table at Brooklyn Fare, as Douglas Kim did before founding Jeju. It is somewhat as if a cook had left L’Astrance in Paris to open a restaurant specializing in interpretations of Hot Pockets.

To judge from the three soups on Jeju’s menu, Mr. Kim is not trying to reverse-engineer just-add-water Korean brands like Shin and Samyang. All of Jeju’s broths have the body and texture that comes with boiling and skimming for hours over an abundance of meat and bones.

One of them, the so ramyun, is made with veal. It is slightly less thick and rich than eggnog, but just as smooth. Mr. Kim ladles this broth over thin squiggles of chewy noodles, a hunk of stewed brisket and thin red sheets of raw Wagyu striated with white fat. Unbashful amounts of garlic chips and black pepper rough up the edges of the broth’s gorgeously rounded beef flavor.

Blood Will Tell, Part I: Who Killed Mickey Bryan?
The pork soup called gochu ramyun has a similarly lavish texture; heavy on the slippery collagen that holds pigs’ feet together, it glides across your lips. This broth, though, is spicy, and the gochujang spooned over the seared pork belly slab on top makes it even more so. This is Mr. Kim’s most obvious homage to Korean instant ramens, many of which are more fiery than the typical Japanese product. But Korean ingredients and seasonings turn up in all of his ramyuns. The gochu ramyun is garnished with daikon kimchi — not the pink, chili-bathed kind, but an unspiced white kimchi that, like the small sheaf of iceberg lettuce, provides a break from the heat.

In contrast to the milky opacity of the veal and pork broths is the translucent, sparkling-gold chicken broth in a ramyun called the Fish Coop. The fish in question is bonito, flakes of which bring a mild background of seafood to the intense chicken flavor. Even with slices of jalapeño and a floating green rim of herb oil tasting of chives and dill, the broth is subtle enough that you can really taste the juicy shreds of chicken confit.

Each of the three soups is so carefully considered, so well harmonized, that Jeju’s menu really could end there. But Mr. Kim makes a handful of Korean-inspired appetizers, too, all more nuanced than what you’d find in a typical ramen-ya.

I love the cucumber kimchi, skinny little numbers whose soft tartness is almost bubbly and very slightly minty. Is there shiso in the brine? There’s certainly plum in the sweet dressing dotted with black and white sesame seeds.

Mr. Kim’s soon du bu doesn’t have the gloom-killing uppercut of more traditional recipes — it’s a little too dainty and mild — but its tomato-shellfish broth supporting the usual soft tofu and some unorthodox but welcome green olives is very good on its own terms.

One of three raw-fish appetizers is tuna yuk hwe in a pallid, forgettable dressing. But the amberjack salad with chimichurri and brown-butter vinaigrette is very delicious, as is the hwe dup bap — sashimi and trout roe over warm rice made extra-fishy by tiny black dots of flyingfish roe.

There are a few other small dishes, including a likable steamed bun filled with pork belly and corn kernels. It will be interesting to see whether Mr. Kim elaborates this portion of the menu a bit, perhaps adding some larger plates. At the moment, it would be hard to make a complete meal at Jeju without ramyun, which may keep away people who don’t eat meat.

Like some other young chefs, Mr. Kim has brought his cooks into the tip pool by asking them to double as waiters. It may help him recruit talent for his kitchen, but it may also be a reason the service is muddled. I’ve been served food meant for another table; I’ve been asked the same question by two people within the space of a minute; I’ve been given empty plates I didn’t need, and had to stop somebody from clearing dishes I hadn’t finished.

The confusion even extended to the greeting at the door. One night when I got there before my guests, a host asked how far away everybody else was. I said I was sure they were close.

These are minor gripes, but Mr. Kim’s cooking deserves better. And so does the dining room, which is roomier and more elegant than the words “noodle bar” might suggest. Jeju took over what used to be Nighthawks, in the space where the north side of Christopher Street meets the east side of Greenwich Street at an acute angle. It isn’t the room Hopper painted, but it’s not far off. Mr. Kim kept the wraparound windows, the black-and-white floor tiles and the recessed tin chandelier rosette, then added some backlighted shelves behind the bar to hold the handmade plates and other pottery.

It is all clean and orderly, just bright enough that when you stand across the street you can see the new nighthawks bending over their bowls of noodles.

Powered by WordPress and WPExplorer Themes